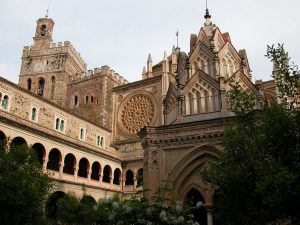 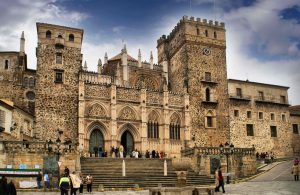 Located in the Cáceres region of Las Villuercas, Guadalupe is a historic village filled with cobbled streets and traditionally designed houses, housing monuments of great value, including the Sanctuary Monastery of Nuestra Señora de Guadalupe, declared Patrimony of Humanity. Here we may visit other mountain locations within Las Villuercas, such as Cañamero, Logrosán or Berzocana. Another attraction of the area is its simple yet delicious Extremaduran gastronomy, characterized by the quality of its raw products.

At the foot of the Altamira mountain range, Guadalupe is a well-known for its history and monumental patrimony.

This typical mountain village, declared Historical-Artistic Landmark, developed out of the Sanctuary Monastery of Nuestra Señora de Guadalupe. Declared Patrimony of Humanity in 1993, the Monastery was ordained in the 14th century by King Alfonso XI of Castile, in honour of the Virgin, after his victory in the Salado battle of 1340. the main centres for the pilgrimage across Spain. It was also a scene of important happenings, being the site where the Catholic Kings granted Christopher Columbus the caravels permitting him to explore the Americas. Upon admiring its superb facade, with its bronze doors, we reach the interior of the building. Inside, there are two cloisters, one Gothic and the other Mudejar, holding a raised shrine of the transition from the Gothic to the Mudejar. The monastery’s sacristy is a must to visit, as it contains eleven canvases painted by Francisco de Zurbarán. One should also visit the alcove of the Virgin, created by Lucas Jordán, where the image of Nuestra Señora de Guadalupe, patron saint of Extremadura, is found. In the centric Plaza de Santa María, the fountain of the Tres Caños recalls the historical milestones of La Puebla, as the first Indians brought by Columbus from the Americas were baptised here. Opposite the monastery is the ancient hospital of San Juan Bautista (15th Century), currently a Tourist’s Parador. Throughout its existence, this building has sheltered pilgrims visiting Guadalupe. It was also an important medical school, training doctors who served in the Royal Court. Next to this building is another cultural splendour of the city’s past: the Colegio de Infantes, where students learned song, grammar and theology.

The principal street, connecting the city’s upper and lower parts, becomes the main axis of an array of cobbled streets and traditional houses with wooden balconies, gates and colonnades.

Other important monuments include the School of Grammar and the Humilladero hermitage (15th Century), in the outskirts of the city. Gastronomy, festivals and surroundings
Guadalupe is a perfect showcase of the region’s gastronomy. Dishes are characterized by their simplicity and quality ingredients: Iberian cured meats, ajoblanco, breadcrumbs (with chorizo sausage, bacon and bread), fried lamb or chicken (caldereta) “a lo padre Pedro”. Wines with Designation of Origin (DO) Ribera del Guadiana are the best way to accompany these dishes. One of the most important festivals of La Puebla is held in honour of the Virgin de Guadalupe, every 8th of September. Guadalupe is the perfect excuse for visiting Las Villuercas, the mountainous region located to the east of Extremadura. The trip across the lovely mountain landscapes will take you to such sites as Bohonal de Ibor, Cañamero, Logrosán and Berzocana.

It is also possible to visit La Vera, with its exuberant landscapes highlighted by the Tiétar riverbanks, along which there are such spots as Hervás, the Yuste Monastery and Jarandilla de La Vera, whose castlepalace is now a Tourist’s Parador. Between Plasencia and Trujillo, the Monfragüe National Park is found, a natural space where outings are possible by foot, bike or horse.